Take me down to Paradise City…

Now while I’m not a big fan of Guns ‘n’ Roses in general, Burnout Paradise will always be synonymous with that song. Whenever it comes on the radio, my memories go back to 2008 when it first came out, giving me summer vibes playing it in my room on the Xbox 360. Now, I get to relive those memories all over again but with added gloss and to quote the beginning of Ozomatli’s ‘City of Angels’: I love it!

Granted, I played through the original Burnout Paradise rather casually, and even more so this time, with it easily becoming one of my relaxation games. I just to put on, kick back and just drive around, smashing up cars, gates, billboards, the lot. Only this time, it’s got all the DLC included, so it’s essentially a Game of the Year edition with added visuals. What’s not to like?

DLC simply adds to the fun

Speaking of DLC, it comes with Big Surf Island, which is a compressed version of Paradise City, but with mostly toy cars (again, condensed versions of the normal sized, in-game cars), so think a micro machines-esque version of Paradise City. With those ‘toy cars’ as they are known, some cars from popular movies appear – minus proper licensing. I won’t spoil it, but when these cars popped up in my car list, I couldn’t help but wear a massive smile on my face, especially when I got to try them out, complete with special features.

I will admit, the soundtrack leaves a little bit to be desired. To be honest, it’s more personal taste more than anything else, with a couple of nostalgic (there’s that word again) tunes that took me back, I mostly went for my own Spotify playlist. I will, however; give props the other aspects of audio like the meaty sounding engines, boost sounds, crunches of metal and more, which in turn work well with the reworked graphics. I love the fact that they used DJ Atomica from their earlier titles and that they do little throwbacks here and there with his dialogue to his time on the mountains of SSX.

There are plenty of things to do around both Paradise City and Surf Island, from smashing Billboards, to getting smash gates, to completing massive jumps over landmarks. Finding them all and having the completely open world of the two islands makes it a seamless experience, being able to drop in and out of events whenever you wish, both online and offline.

Speaking of online, you can jump online with up to a party of 8 for a good ol’ drive around these 2 islands and compete in any event that you wish, so getting a bunch of mates together and competing over road rules or playing cops and robbers is a particular highlight.

This is more than just a re-master and nostalgia trip in my eyes. Yes, the majority of the game stays the same, but there are more minute details found because of the graphical upgrade, little nuances (again, which I won’t spoil) and all the DLC which just make it an absolute blast to play over and over again. 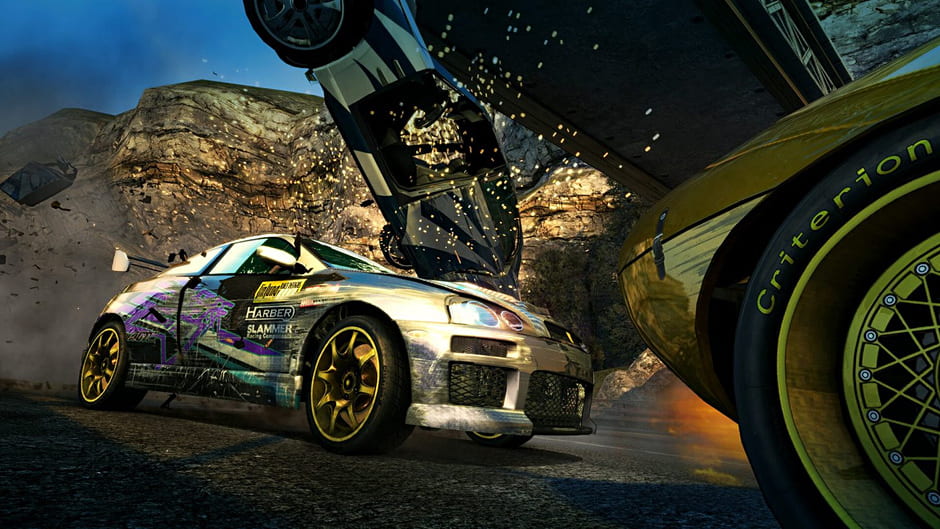 Welcome back to Paradise City! Make action your middle name as you rule the streets in Burnout Paradise™ Remastered. Tear up the town from hectic downtown avenues to wild mountain roads. Relive the high-octane stunts and wanton destruction of one of the greatest arcade-driving games ever! Burnout Paradise Remastered provides the ultimate driving playground for you and your friends to play online. This remaster includes the 8 main DLC packs from the Year of Paradise, including the Big Surf Island update, meticulously recreated and ready to wreck!
0
Average User Rating
0 votes
Have Your Say!
Your Rating: 0
Submit
Write A Review
Release Date:Mar 16th 2018
Developer:Stellar Entertainment
Website:https://www.ea.com/games/burnout/burnout-paradise-remastered