Honestly, where do I begin with the best game I’ve played this year aside from god Of War. Spiderman PS4 is truly something special. Gameplay is awesome, there’s loads of items to collect, graphics are stunning, but whoah slow down. I’m getting ahead of myself. Let’s just say it’s like Assassin’s Creed Origins meets Batman Arkham Knight. Without further delay here’s our Marvel’s Spider-Man PS4 review.

One of the great aspects of Marvel’s Spider-Man in terms of collectables is the fact that they actually want you to find the collectables, and reward you for doing so. By this I mean there are towers scattered across the city that you’ll need to find and then descramble. Specifically you’ll need to descramble radio waves by finding the right frequency. This will then result in unlocking a quadrant of a district (Harlem for example) and will reveal all the hidden collectables it has on offer.

You’ll need to find Peter’s backpacks to get backpack tokens highlighted in green on the map. As you swing through the city ther’ll be random events that are highlighted in red to show a crime in action that you can choose to go after or retry later. Crime events may be anything from someone trapped in a car, a truck carrying a bomb, or a gang the police are struggling to tear down. When you complete each of these you’ll receive crime tokens for your troubles.

Research centres are little hubs dotted around the city in a blushing purple colour. Although there aren’t as many of these as other collectables, they can prove a little more difficult to complete. A research centre may require you to swing through a cloud of smog to collect samples to swimming the docks to purify the water to avoid any marine life deaths. You’ll get research tokens for completion.

Spider-Man investigates a mysterious military-grade box on a roof and receives a call from an unknown caller in the process to say there are bombs he’ll need to diffuse in a short amount of time before they blow. This unlocks the challenges portion of the game where you will need to complete various time challenges to receive challenge tokens.

And then there are suits. As shown in the image below there are a number of suits which you can unlock by collecting the various tokens and reaching certain levels of experience. Every suit has its own ability which in turn will help you defeat your enemies that bit easier.

As we know there are some awesome sights to see in New York City, and with that comes Landmark tokens. Spread across the city map are blue landmark locations where you’ll need to take photos of the clear. Pretty straightforward.

An old friend of Spidey has lost his pigeons across the city, and as you take on a side missions this adds another set of pigeon icons to your map which you’ll need to locate, and then chase down to catch them.

Similarly an admirer of Spider-Man lays black cat stake out locations for young Peter to find. This involves using a camera to search a given location for a small novelty cat to complete each location.

Lastly there’s Fisk construction sites and warehouses. These are full of goons that you’ll need to take down several waves of in order to get your hands on base tokens, the final piece of the puzzle to unlock new gear and equipment.

Much like when I first played Assassin’s Creed Origins earlier this year, the combat system in Marvel’s Spiderman takes a little getting used to. You can easily get by with the basics such as dodge and attack but then we get into uppercuts and focus bars which is a little more advanced.

You’ll have a focus bar which will be evident during any fight, and in a nutshell it has two main purposes; fill it by landing attacks and dodging others, and using it to replenish health. The second is to press a button combo to land a one strike kill to thugs and shielded foes which can come in handy. As you progress through the game and you become stronger, so will your enemies. With this in mind some enemies will need two bars of focus to be able to land the devastation kill as one bar won’t be enough.

It probably goes without saying but to get stronger, gain new abilities and attempt harder missions, you’re going to have to level up by gaining XP. As you complete main missions, side missions, and find collectables you’ll gain XP and inevitebly level up. As a reward you’ll receive skill points which you can spend on unlocking new moves and skills within the skills tree tab.

As you’d expect no less from Peter Parker A.K.A Spidey, the web singing superhero wouldn’t be as we knopw him without the tech and gadgets that we know and adore from the movies.

The story is one that will appeal to fans of Spidey and newbies to the web-shooting superhero. Every mission is totally different and you’ll take control of various characters throughout. Not only will you play the role of Spidey and Peter Parker, but you’ll also play the role of Mary Jane and some new additions to the story we’ve not seen before.

There are a great selection of villains, some familiar while others are making a new appearance, regardless of the difficulty level they’ll have you thinking about the best approach to take them down.

From the very start of the game you’ll learn how to navigate the City by using Spiderman’s web shooters to swing between buildings. This can be a little tricky to master at first but within the first hour of playing I was used to it and quickly navigating the city.

Supposedly Spider-Man was given a graphics downgrade just before the game launched last week, but in my honest opinion I think you’d have to look pretty hard to notice any real imperfections. I’ve played the game on a standard PS4 and a PS4 Pro and both look graphically stunning and crisp in HD and 4K.

Last but not least… the one liners

Some of the lines that Peter Parker comes out with in Marvel’s Spiderman are simply brilliant to say the least, let alone highly amusing. Some of these anecdotes will appeal to the mature audience while the younger audience will still catch on the the quick-witted humour of Spidey. This is great because it means as you’re swinging through NY you’re not just taking in the sound effects and music, but are instead laughing at the antics of ‘Spider-Cop’ as he likes to be called!

That concludes our Marvel’s Spider-Man PS4 Review. If you’re playing it we’d love to know what you think. 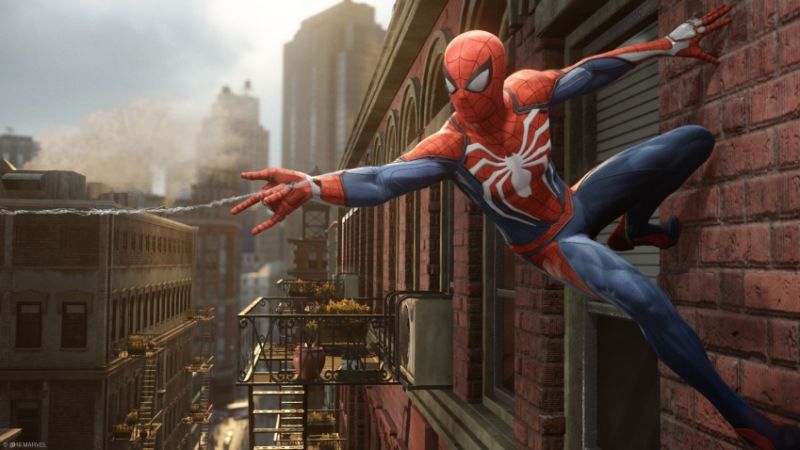 Sony Interactive Entertainment, Insomniac Games, and Marvel have teamed up to create a brand-new and authentic Spider-Man adventure. This isn’t the Spider-Man you’ve met before, or seen in a movie. This is an experienced Peter Parker who’s more masterful at fighting big crime in New York City. At the same time, he’s struggling to balance his chaotic personal life and career while the fate of millions of New Yorkers rest upon his shoulders.
9.7
Average User Rating
1 vote
Have Your Say!
Your Rating: 0
Submit
Write A Review
Release Date:2018