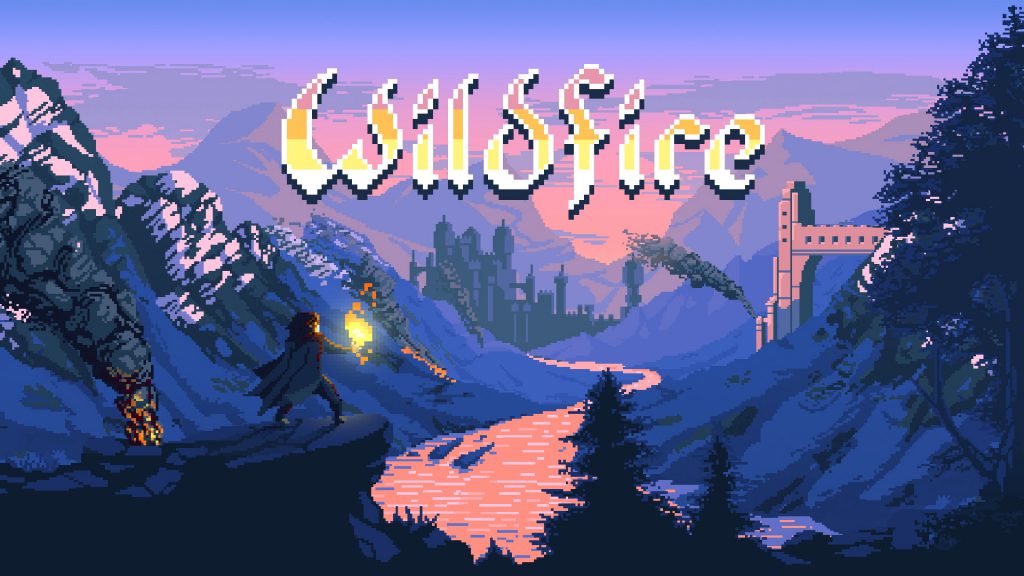 Games made in GameMaker sure are impressive these days. The engine allows small teams comprised of weaponized gusto to hit the ground running, but there is certainly a bar of talent that separates your average GameMaker game from something that shines brightly. Developer Sneaky Bastards is one of those talentful studios, and Wildfire is a very good game.

Originally released a few months ago on PC, Wildfire makes its way today to every console you care about. I got to look at the PS4 version of the game, from which I played the first thirteen levels in the time I had, then briefly compared it to the Steam release to get a sense of how it plays across the gap to console. 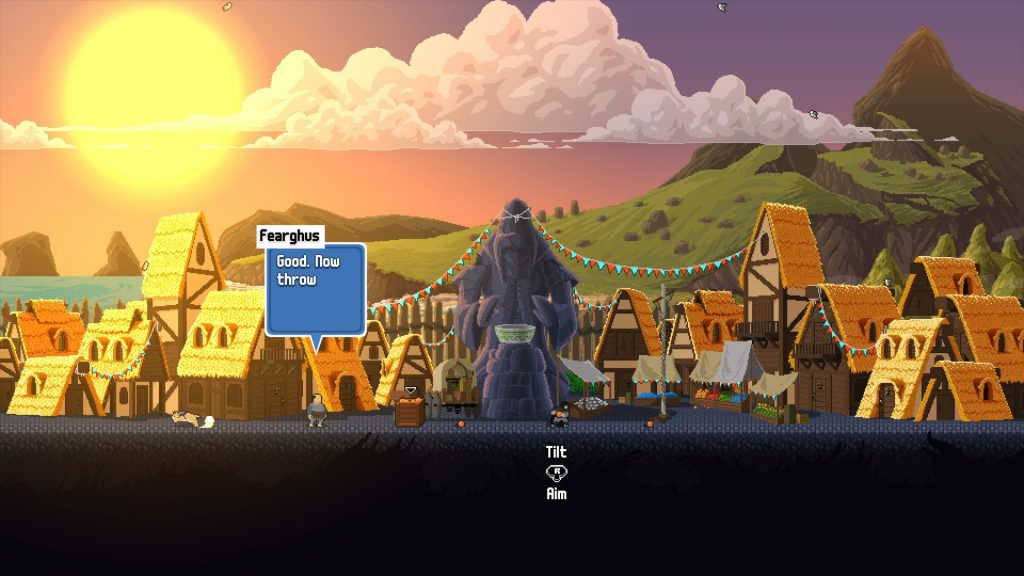 Wildfire is a stealth game about a witch who can control the elements to rescue the people of her village. There is surprising flexibility in how many ways there are to win, despite being a game about stealth. You can dash right through like a speedrunner (complete with optional speedrun timer in the settings), or you can take your time and save everyone while avoiding all combat. You can even take your opponents head on, but only if you’re clever enough to actually damage them. I loved luring guards to the edge of a cliff, then jumping out of the grass or setting fire to something at their feet to scare them off the edge to their doom. Probably not the intended way to play, but was a fun and emergent way of solving problems.

The story plays out through digestible chunks of puzzle platforming, so you’re never overwhelmed. Saving the villagers is legitimately fun, ordering them to follow you or carrying them on your back so you can hilariously throw them around the map hoping not to get caught. The greater lore of the game comes from glowing rocks inscribed with childhood fairytales warning of the dangers of wielding the elemental powers you accumulate. It all leaves you feeling as though there’s so much more to know in the margins, since the game never forces its narrative on you as you play.

The visuals are beautiful. Animation is clear, fluid, and playful. The use of gradients and bloom accentuate the environment, even if jarring against the pristine pixel art, but it’s used artistically and cements everything into the “hi-bit” style of pixelated presentation. There are some backgrounds here or there that betray the game’s consistency of scale, but absolutely everything important to gameplay is finely tuned and crystal clear in its function, visually pleasant and lightly animated. 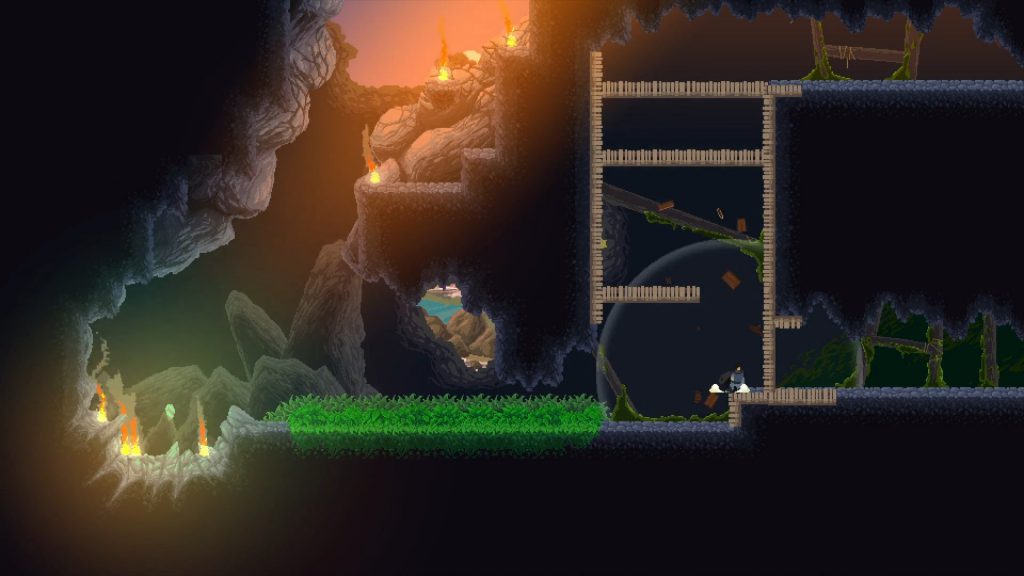 “Hi-bit” is a style that embellishes pixel art with gradients and blooms.

I can say right away the PS4 version looks decidedly better than the PC version thanks to some smart scaling. 1440p support on PC is lacking, for one. The PS4’s scaling keeps the game’s consistent pixel size intact at any resolution, and it looks great. If you’re playing on a PS4 Pro, the console’s supersampling really cleans up this kind of artwork even when the camera is zoomed to odd values. This eliminates any weird pixel shimmering that can happen on the PC when you’re not running a multiple of 1080p. 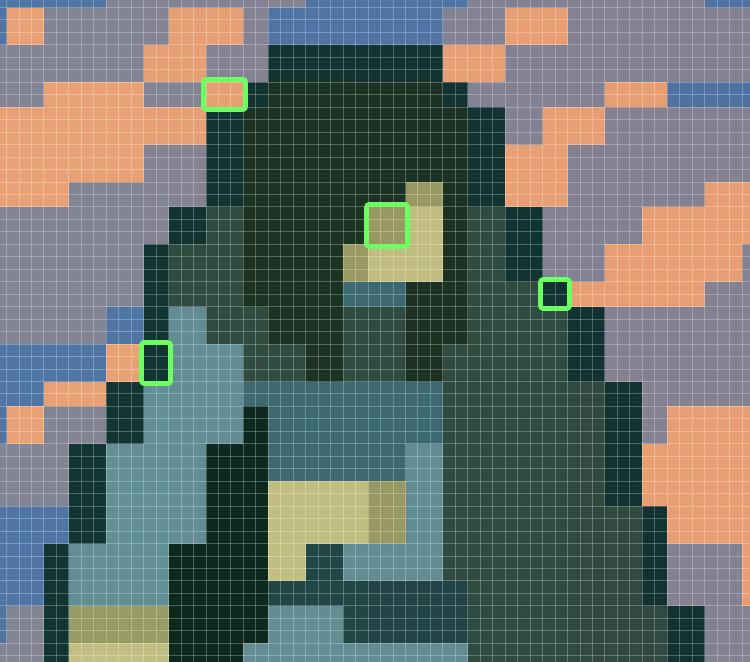 The PS4 version fixes this pixel shimmering found in the PC version.

There are also some noticeable visual differences on console, and for the better in my opinion. For example, distortion effects are handled differently on PS4, making the pixels warp without integer scaling to make these effects appear smoother. Normally, I would prefer the way the PC does it, but the effect on PS4 is more subtle, artful, and more in-line with the hi-bit aesthetic they were going for. 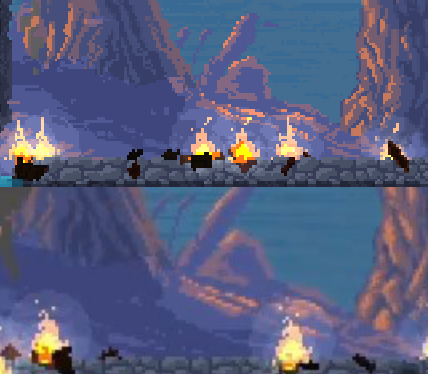 The game feels great to play too, both on a high quality monitor and an old laggy TV. This is thanks to the game’s smart implementation of platforming controls. Climbing is handled intelligently, a feat many other games fail at. You have generous allowances for jumping off ledges the way a platformer should, and it never seems as though the game misreads your intentions. 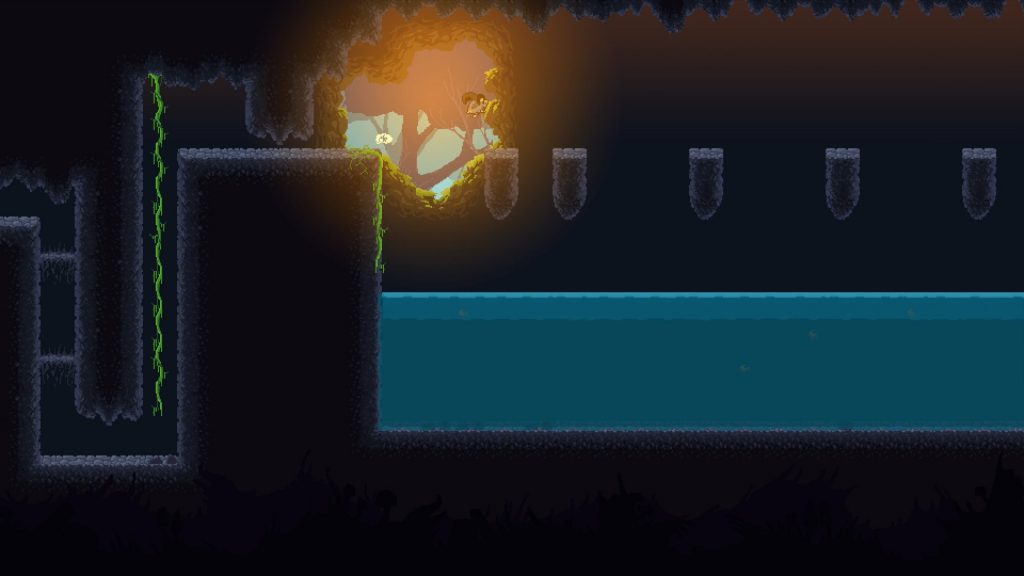 There are sections of tight platforming, and they feel good to complete.

That said, the control scheme is an entirely separate consideration. Despite so many accessibility options available already, the ability to define one’s own controls is missing. The developers have opted to put primary actions on the bumpers and triggers so that the right stick can stand in for mouse-style aiming. I wish I could change this, I really do, especially on the PS4. The PS4 controller is particularly tight between the d-pad and the left shoulder buttons, causing you to pinch to reach both at the same time. Then, you’re almost always holding the run button on L2, exerting constant force in this cramped position. Face buttons would be better suited for this kind of constant primary action, and are less mushy than analog triggers. 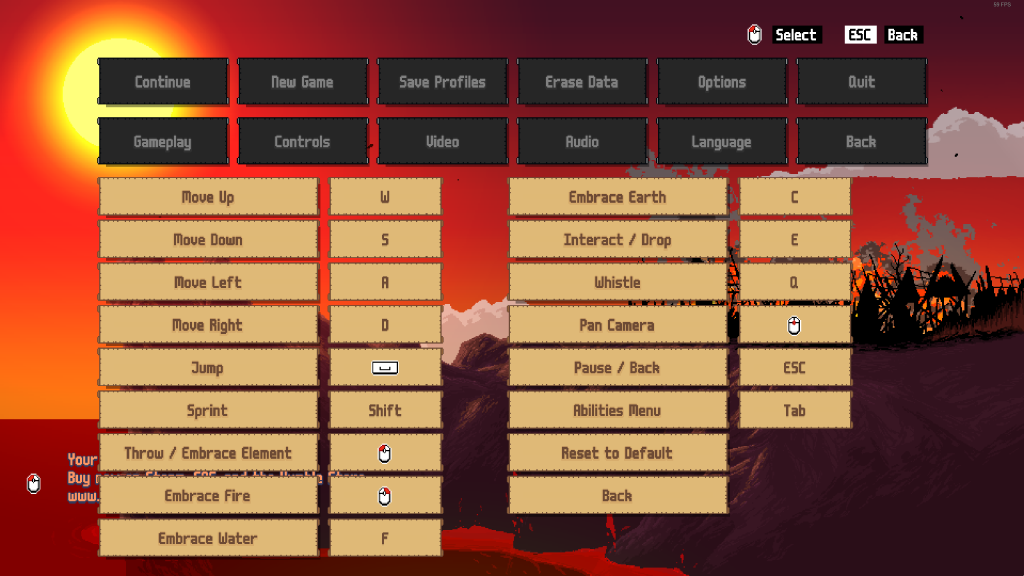 You can customize the keyboard on PC, but not controllers on either platform at this time.

If you’re one of those people that can play platformers with a joystick, you’re going to be better off than I am. That said, the joystick isn’t used for what it’s good at. There is no analog movement in the game, and the stick acts more as a digital switch with a large deadzone. This makes it very inaccurate to play with. Curiously, the developers seem to have noticed this problem and tried to solve it by adding a slow acceleration to movement, as well as a long deceleration after you stop holding the direction. Neither of these belongs in a platformer demanding precise movement. After all, why get rid of analog movement only to add momentum in its place?

There’s also no UX reason for these decisions. The benefit of having the right stick for aiming is to allow movement on the left stick while doing so. The game rarely requires or encourages this, and it would be more of a speedrun tactic to begin with. The face buttons are used for less common actions, such as picking up a handful of fire from the environment. This is redundant, as your primary action button (R2) already does this for fire by environmental context. The other face buttons are used to collect specific elements other than fire, but I have yet to see why this distinction matters since the placement of other elements is just as contextual as fire is. 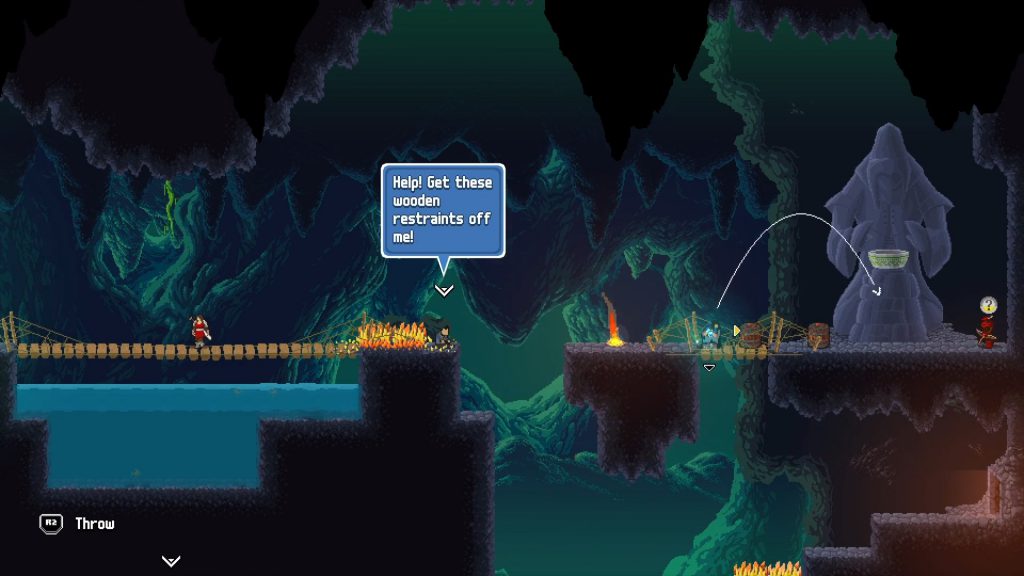 This was tougher than it should have been.

The game’s original keyboard mapping has the same problem, as well. It’s an indication that the element gathering system should have spent more time in graybox testing, and could have been simplified greatly. The complexity of it also hinders the game logic in some instances. There was a point where I was trying to run while aiming (L2 + d-pad + right stick), when depressing R2 to throw a ball of water caused me to cancel throwing the water. I tried this tactic over and over before I realized this had to be a bug. I’m sure this will get patched before too long, but the underlying cause probably has to do more with the choice of control scheme and GameMaker’s implementation of analog triggers than some small edge case I just so happened to find.

Moving on. While identical to the PC, the music in Wildfire is a mixed bag. The tracks are well-composed and atmospheric, and the melodies are pleasant. There is an attention to detail in the music that really shines through, as well. Rising tension leads to moments of surprise, and this not only happens in stealth conflict but also in the areas of your perfectly safe home town. It’s really well done. It’s all evidence of the game’s polished presentation. Bursts of music even made me realize you can interact with NPCs in small ways, like startling them when you sneak up from tall grass. That little interaction even serves as an invisible tutorial for encounters later on, and is how I knew I could jumpscare guards off cliffs. Fun!

That said, the instrumentation is very distracting. At first I thought they were using some kind of MOD or MIDI setup to allow for the cool way the music tracks dynamically change intensity depending on your situation. A look at the file structure indicates the opposite, however. The music in the game is made of several audio files playing at the same time, and the game fades each one in or out as needed. Simple and effective.

Given this information, I really wish they would have recorded the tracks with better soundfonts or, better yet, used a music tracker that better naturalized the performance. As it stands, the game has a great soundtrack marred by what sounds like late 90s Sound Blaster MIDI. If the team was limited by the technology available to them, I would have recommended leaning into those limitations instead of trying to write for orchestral instruments. An 8 or 16-bit music profile would have perfectly fit their hi-bit pixel aesthetic, and it would not have detracted from the Gaelic / Celtic feel they were going for.

Ultimately, whatever gripes I have don’t change the fact that this is a great game, and the PS4 version is a competent port. If you’re as sensitive to the control scheme as I am, consider playing with a keyboard on the PC version, but at this time of writing the best presentation of the game for the most people is on console. The PS4 version looks beautiful, the art and effects are more cohesive, it plays phenomenally (in spite of the control scheme) and makes for the best way to experience this captivating game.

Games made in GameMaker sure are impressive these days. The engine allows small teams comprised of weaponized gusto to hit the ground running, but there is certainly a bar of talent that separates your average GameMaker game from someth...
0
Average User Rating
0 votes
Have Your Say!
Your Rating: 0
Submit
Write A Review
Developer:Sneaky Bastards
Website:https://www.humblegames.com/games/wildfire/