Assassin’s Creed Valhalla is the latest instalment in the series, which takes us away from the sun swept lands of ancient Greece, to the snow glazed Fjords of Norway and the lush meadows of Ninth century England.

The story follows a Viking tribe known as the Ravens. The Ravens leave Norway in search of a new, more hospitable place to call home, and they seem to have found the perfect place in England, but the locals are far from willing to just hand it over.

The story is told from the perspective of the main character, Eivor, and her adoptive brother Sigurd. Eivor can either be played as male or female, and you can even change throughout if you’re not satisfied, so you’re never locked into playing as one or the other. 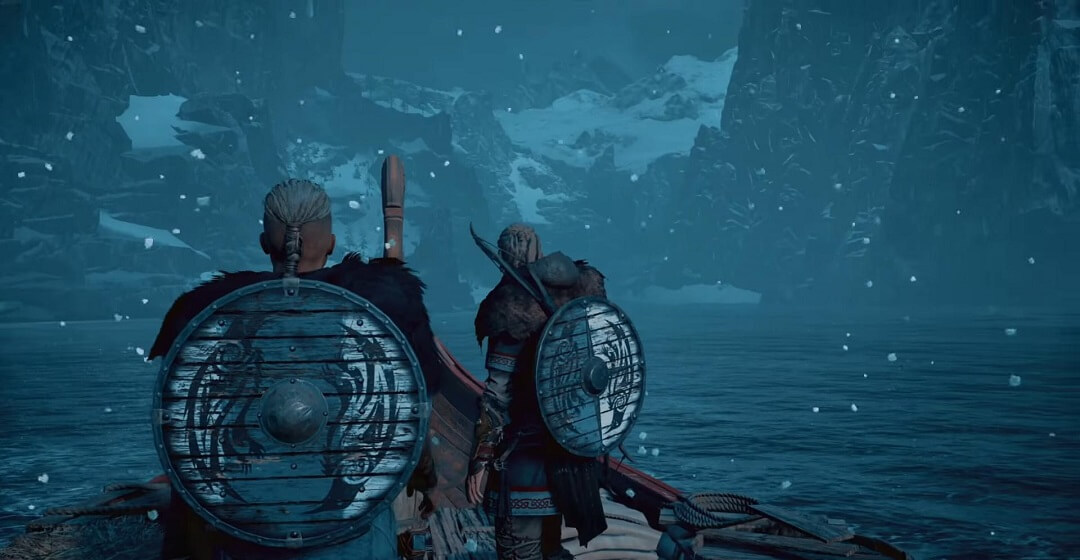 The gender you choose to play as is more of a personal choice, you’re still going to experience the game in the same way, as the role of gender in the game doesn’t affect the telling of the story.

As your clan sets out to settle in England, they find their first settlement, which is decidedly named after your clan – Ravensthorpe. Sigurd hasn’t given up on his ambition of ruling, so together with Eivor, they work to carve out new alliances and gain more influence throughout England. Many of the quests revolve around your need to impress other tribal leaders, in order to win their favour in support of your own cause. 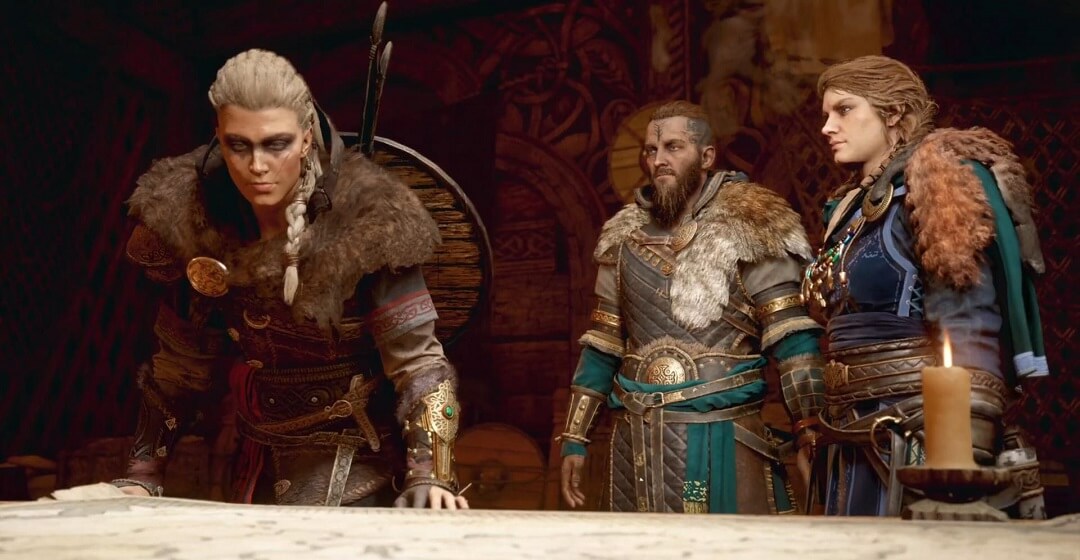 In between quests, you will often find yourself travelling back to Ravensthorpe. This is your primary bastion in the game, and as you progress you will unlock new additions to the village, like a blacksmith, bakery or a brewery among many more. These upgrades also unlock character stat buffs, like an increase in assassination damage and other temporary buffs through hosting a feast. These upgrades also make it possible for Eivor to embark on new missions or side quests.

If you want to upgrade Ravensthorpe however, you need to do what the Vikings did best, and start raiding! Each upgrade requires a certain amount of resources, so you will need to plunder some other settlements and monasteries in order to steal their loot.

Helping out your fellow townsfolk makes a great change of pace in the game, as most of the main story takes place outside of Ravensthorpe’s defences, there’s still something incredibly satisfying about helping out your own clan, and getting to know each of them more personally – and if that isn’t enough, you might even find love along the way! 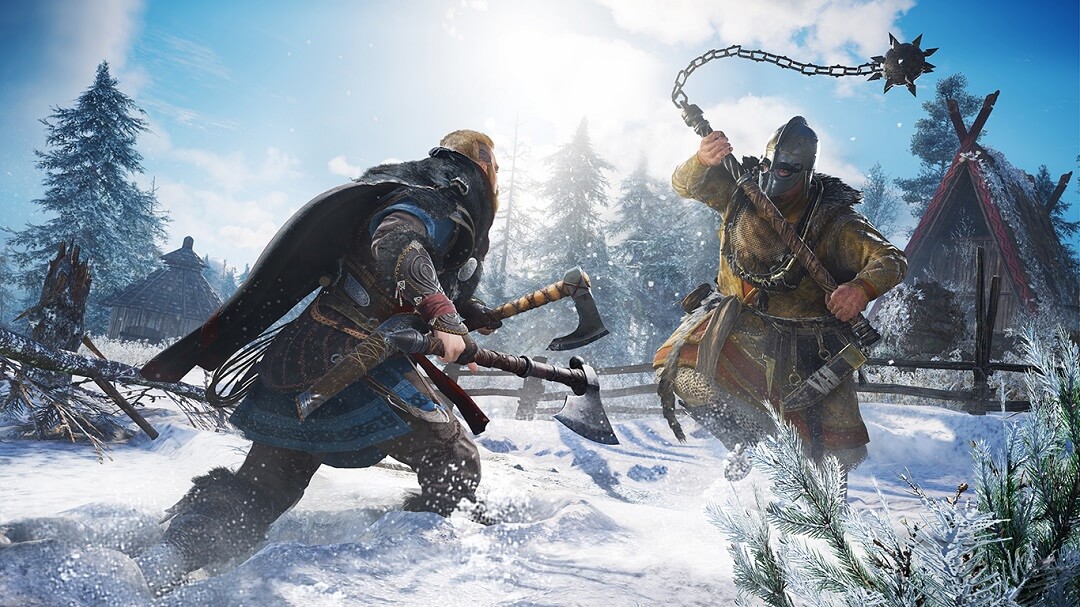 The combat is highly impressive. At first, given the combat we saw in the games pre-release trailers, I was a little worried as to how complex it would be in the larger battles, or if it would be clunky, if not overwhelming.

Despite the initial impressions, however, the combat flows neatly from enemy to enemy and stays true to the Assassin’s Creed style that fans have grown to love over the years.

The larger battles do sometimes feel as though they are lacking complexity, however. They don’t feel very well thought out, and the skirmishes between friendly and enemy soldiers don’t seem to be getting anywhere. Each battle very heavily depends on your sole objectives and if you manage to complete them successfully.

Progressing through the skill tree gives you the ability to dual-wield, and access more special attacks which makes the combat even more satisfying. It offers a fresh approach to combat in terms of variety, so it doesn’t feel as though it’s becoming boring the more you play. You might decide to keep the iconic axe and shield, but experimenting with other, more violent ways to annihilate your enemies is so much fun.

Contrary to the original AC titles, stealth is always an option, but it doesn’t force you into that style of play. As the game becomes a lot more open in its RPG elements, you can also play in the style you want. If you prefer hacking your way to victory, so be it! You can play in the way you feel is best. 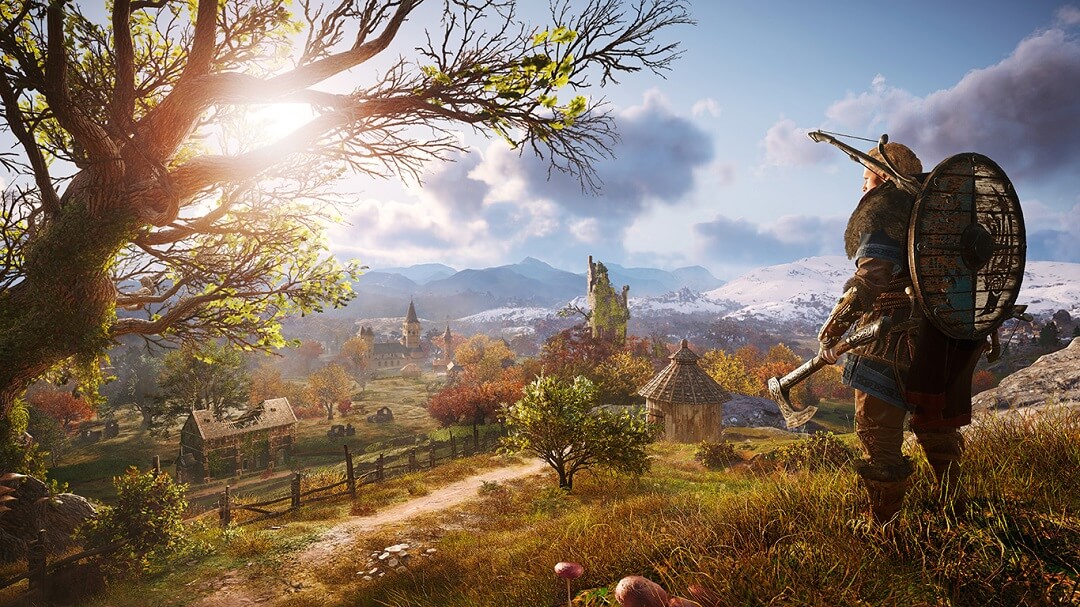 The game looks stunning. The rich Viking and Saxon culture is covered in detail throughout the landscape of the game.

The intrinsic details of the ancient artwork that adorns structural walls are beautiful, as well as the clothing and the features of each character which is perfectly captured by how we imagine the Vikings to have been.

The seasonal landscapes are embellished with sun, snow and fire-lit torches that guide the way through the dark nights. The details of the game’s environments encourage exploration, and it never feels dull.

The soundtrack for the game is also quite dark and dramatic, which adds to the ambience and pace of the game nicely. Jesper Kyd hasn’t disappointed with the other AC titles he’s worked on, and Sarah Schachner’s AC Origins soundtrack was also a great score, so it didn’t seem as though the score for Valhalla would be a disappointment, and it definitely isn’t!

Assassin’s Creed Valhalla is the best in the series so far.  The story runs deep, and it feels as though it’s an improvement on Origins and Odyssey, which were both great games in their own right.

Overall, Valhalla doesn’t disappoint, and although in some respects it doesn’t feel like the classic Assassin’s Creed experience, it still delivers, and it shows how far the series has come, while still building on its core concept. The series is evolving, and it’s interesting to see where it will go next! 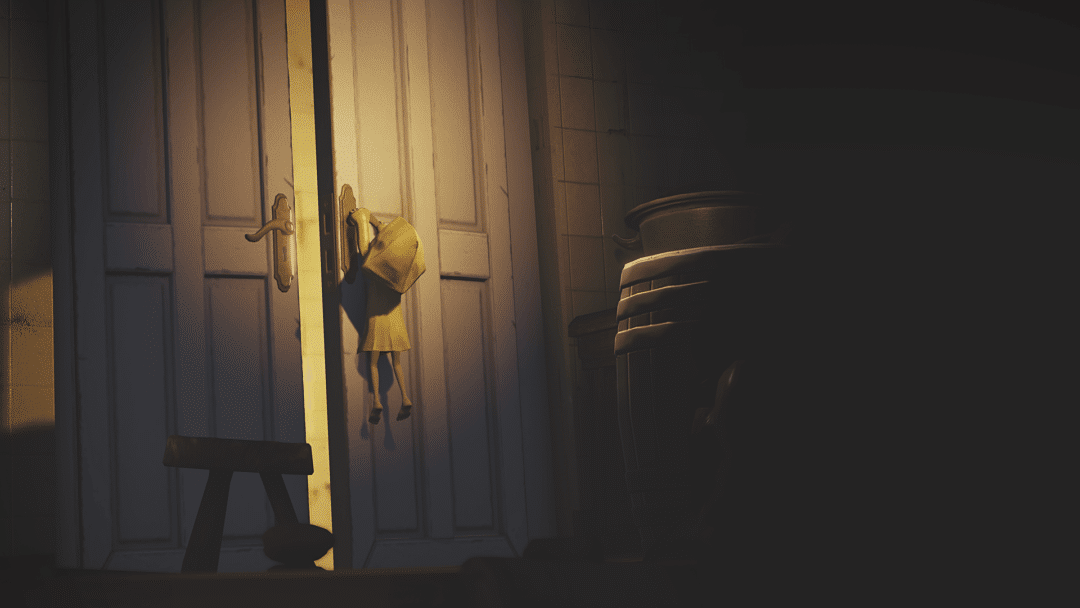 .gp-subtitle{font-size:16px;}.gp-meta-author{display:none!important;} Assassin's Creed Valhalla is the latest instalment in the series, which takes us away from the sun swept lands of ancient Greece, to the snow glazed Fjords of Norway a...
0
Average User Rating
0 votes
Have Your Say!
Your Rating: 0
Submit
Write A Review