Following on from the successful port of the original 8-bit sonic the hedgehog outing, “Sonic the Hedgehog 2” introduces brand new stages, mechanics and gameplay features that you just won’t get from the Megadrive original! Released back in October of 1992, a month ahead of it’s older brother on the Sega Megadrive 2. “Sonic 2” on the Master System marked the first appearance of Sonic’s now famous two-tailed sidekick, Miles “Tails” Prower. Although Tails isn’t playable unlike the Megadrive version, the plot of the game is centred on Sonic attempting to rescue Tails from the evil clutches of Dr Robotnik whilst also saving the animals of South Island and tracking down those pesky Chaos emeralds again!

With the Master System being an exclusive release for Europe and Brazil, a Game gear port was also developed and released globally for the rest of the world to enjoy. There are a few minor differences between the two versions with the main difference being the heightened difficulty level of the Game Gear version due to the scaling of it’s sprites making it very difficult to spot and avoid hazards on time!

Zipping through those zones!

“Sonic the hedgehog 2” steps bravely away from the Megadrive version of the game and sets out to be a completely unique experience. The action takes place across seven unique zones with the seventh only being unlocked for players who manage to acquire the Six Chaos Emeralds from their hidden locations in the first six zones. Only through achieving this will the seventh Zone, “The Crystal Egg” be unlocked and allow players to rescue Tails and reach the true conclusion of the game.
Zones are rich and varied, with a unique starting zone “Underground” providing players with an unusually early challenge involving minecart rides and lava pits. (Makes a change from starting at Green Hill Zone again although don’t worry it’s still included!) Each Zone comes complete with its own gameplay gimmick, from the bubbles and water skipping of the Aqua Lake zone through to the tricky hang-glider sections of the Sky-High Zone.

Hidden away in the second act of each zone is the afore-mentioned Chaos Emeralds that the player will be needing to see the true ending. Some of these can be fiendish to get so you’ll have to strap on your explorer boots if you’re set on finding them all! The ring mechanics have been upgraded from Sonic’s first Master system outing and he will now drop a pile of rings which can be recollected for a brief period upon being hit by an enemy. As usual, collecting 100 rings will grant Sonic an additional extra life. Unfortunately, the series staple of the Bonus round doesn’t make an appearance in this game, but this is made up for with larger, more detailed zones with plenty of rings and bonus items to be found tucked away in each act.

Boss battles are back, this time in the form of Robotic animals that do the fighting so Robotnik doesn’t have to! These are varied in their design and include an Antlion, a Goose, a Sea lion and a Pig. These bosses all come with their own attack patterns and weaknesses which will need to be identified to despatch them quickly and with minimal damage to your stock of extra lives!

Being released a few years into the Master System’s lifespan has really paid off here, as the Developers have been able to really squeeze the most out of the hardware for this outing. The sprite work has been fine-tuned from the first 8-bit sonic game and the variety of enemies and gameplay features really stand to maximise the gameplay experience. Each of the game’s seven zones are well detailed and generally fun to play through with some tricky sections thrown in to add a new level of challenge for seasoned Sonic fans.
The music, whilst not quite as memorable as the first game, is generally pleasant and suited to the theme of each zone. “Sonic the Hedgehog 2” is often featured highly on various lists of Master System must-haves and this placement is highly deserved. Although it would have been nice to take Tails for a spin as a playable character (Master System players would need to wait for “Sonic Chaos”, the next entry in the 8-bit series.) Sonic handles well and comes equipped with his basic moves from the first game to help him reach the games epic conclusion.

Sonic the Hedgehog 2 offers a solid platforming experience for established fans of the series, as well as offering enough fresh gameplay to attract newcomers who are seeking an enjoyable adventure on the Sega Master System. With the larger levels and tricky Chaos Emerald placement, there’s a lot to see along the journey and it certainly won’t be as easy this time around for anyone who found the first game to be a bit on the Easy side.

Due to it’s high print run, copies of Sonic the Hedgehog 2 both on the Master System and Game Gear are relatively inexpensive and can be picked up from about £4.00 for a cartridge and £7.00 for a complete copy. With that sort of difference, you may as well go the whole (Hedge)hog and opt for the box and manual too.

In short, if you have a Sega Master System and you like platforming games then Sonic 2 is a total must-have for the console. Even if you don’t like platformers it’s probably worth picking up just to put a complete Master system title (With pretty box-art) on the shelf for less than a tenner! Get those speed-shoes on and go grab a copy! 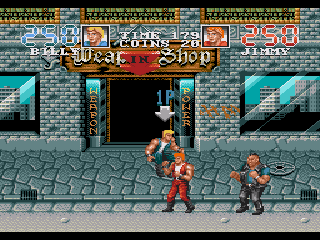