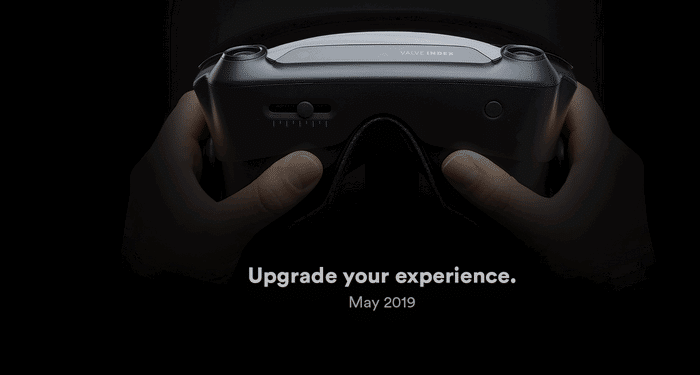 With the huge success of it’s collaboration with HTC, bringing home to HTC Vive for PC users, Valve is now due to launch its own fully fledged VR bombshell. Valve kept the announce fairly low key by launching the very first teaser details of the Valve Index on it’s website. The image as shown above gives very little away other than a launch date of May 2019 and the wording “Upgrade your experience”

Considering there have been job losses in the hardware team over at Valve the virtual reality experience seems to be pushing ahead, with Valve previously communicating the lay-offs wouldn’t mean anything too major in terms of changes.

What do we know about the Valve Index?

With it being very early stages in terms of the Valve Index announce, we don’t have anything concrete to communicate – and therefore can only speculate on features and price. So far a logo has cropped up online in addition to filings of various trademarks, and if we focus on how Steam VR has evolved over the years we can get a general idea of what the Valve Index could be capable of.

Since VR became a thing with the Vive we saw valve using the ”Knuckles” finger tracking mechanics, but again there’s no word if the Valve Index will follow suit.

„Valve Index“ now has a logo, as part of its trademark filling.

Now that the Valve Index is out in the open, it’s unlikely it will be very long before we see what the new tech beast can really do – and if it completely outperforms the likes of the PSVR, the Vive or the Oculus giants. Personally I’d be fairly happy to see a Batman Arkham VR sequel or even a spin-off to The Inpatient!

On a side note Oculus may not be looking forward to hearing the full details on what the Valve Index is capable of, seeing as how they’ve crept away quietly from their competition. Vive on the other hand may be even more worried, seeing as how the users of its device flock towards titles that are developed by Valve – so a high-end VR system may not be something HTC look forward to. For us consumers though, bring it on.