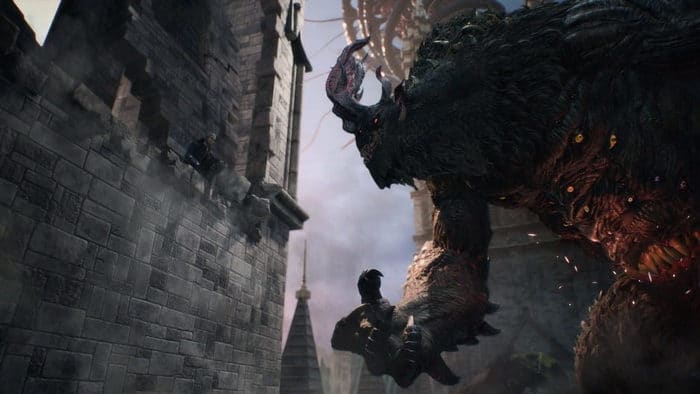 Launching on Friday Devil May Cry 5 has proven to be a smash-hit among fans, with the majority of reviews coming in as fairly positive. There has, as is often the case with new games been some controversy when comparing the Xbox One, PC and PS4 versions – specifically to do with a Devil May Cry 5 censored scene covering up a character’s ass.

Among the many Devil may Cry 5 cinematic cutscenes is one where Dante (the star of the franchise) swoops down to rescue Trish from a beast of a monster. We see the monster release Trish from his clutches she ends up being without her clothes… stark naked. After Dante homes in to save her and places her on the floor players get an eye-full of well, her butt.

For some reason though the PS4 version of the game is a little different, instead of seeing Trish’s butt we’re welcomed by a Devil May Cry 5 censored lens blurring out the whole things with the headlights from Dante’s motorbike.

The Devil May Cry 5 censored scene has been reported to only appear in the 18-rated title in the PS4 Western version, the Xbox One version globally doesn’t put the censor up nor the PS4 Japanese version.

Check out the clip below from Naughty Gaming 2 which compares the versions.

There’s no definitive answer as to why Capcom have done this, there are rumours that it relates to a new policy from Sony that aims to dull down sexual gaming content. Taking the Senran Kagura game as an example last year where the intimacy mode was removed from the PS4 (where Steam still had the full on intimacy mode), this isn’t the first time Sony have done something like this. Senran Kagura’s Producer of localisation at the time said this was a “a brand new policy” Sony was adopting. It’d be interesting to see if Capcom responds to say if the Devil May Cry 5 censored scene was part of the new policy.

What is strange is when you com,pare the devil may Cry 5 censored bum scene to other PS4 titles with 18 ratings through the years, which have shown much more ‘colourful’ content. It’s even stranger that they’ve only covered up Trish’s bum when in another Devil May Cry 5 scene there is a fully naked rear-view shot of Lady which isn’t covered at all!

Even though Devil May Cry 5 is proving a hit it doesn’t come without its oddities, like the DRM PC version having an effect on frame rate drops for example – nonetheless it’s an overall great game.

Want to see what all the fuss is about? Devil May Cry 5 reviews are soaring, and it’s available right now to buy on Amazon!