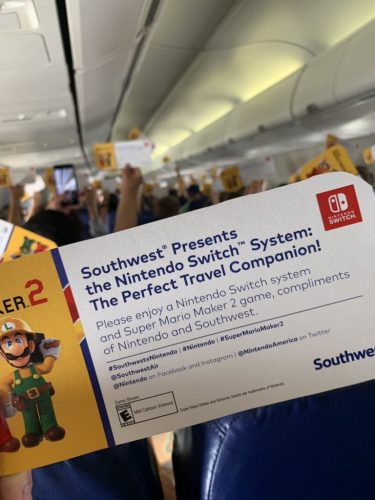 Well Nintendo has certainly been smashing it out of the park this month, with Super Mario Maker 2 Switch sales heading straight to the top of the charts. Then came the announce of the Nintendo Switch Lite console releasing this September, with a much more portable design but boycotting detachable Joy-Cons and rumble features.

Nintendo didn’t stop there though, a Luigi’s Mansion 3 release date followed, dropping a spooky release for Halloween for the 31st October. Going even further the Super Mario Maker 2 Switch boasters announced that a new Nintendo Switch (just called Nintendo Switch) would be coming in September too, offering some hardware improvements including better battery life.

Super Mario Maker 2 Switch, what do you mean passengers got it free!?

Following E3 2019 Nintendo has clearly been smashing it in terms of, well everything! To add to this span of good fortune they offered generosity in a big way to passengers aboard a San Diego Comic Con, which included a giving all passengers a copy of Super Mario Maker 2 Switch and a Switch console to play it on completely free.

SDCC is off to a good start! Thanks @southwestair & @nintendo for the best flight ever!

Why did they get a console and a copy of Super Mario Maker 2 Switch you ask? It just so happened that there was a bit of filming going on in relation to a promotyion, even the flight attendants got in on the action as you can see below!

The fun didn’t stop there though, the Switch consoles handed out also contained a Super Mario Maker 2 Switch level that hasn’t even been released yet! Keep your eyes on Star Struck Gaming where we’ll be updating you on anything that gets revealed during San Diego Comic Con, and of course much more.

Anyway, I may already own a Switch, but that’s not stopped me feeling insanely jealous…