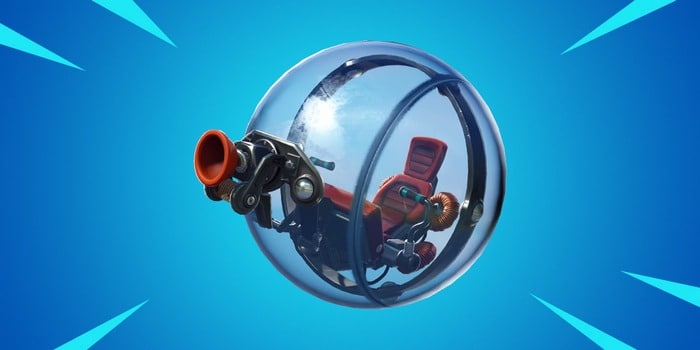 It wasn’t too long ago that Fortnite developers Epic Games revealed that the game would be getting a new fortnite vehicle that would be available in single-player. In a more recent update the devs have further confirmed exactly what this new vehicle will be, and it looks much like the discovery (or escape) pods that we all know from Jurassic World – basically a giant ball with a seat.

The new Fortnite vehicle is set to be named The Baller – no laughs please.

What will the new Fortnite vehicle have on-board?

The new Fortnite vehicle which distinctly looks like your’e going to be running round in a massive hamster ball, is set to allow players to roll around and it comes with a fuylly-fledged grapple as standard. Having this item seems as though players may be able to get from building to building using the grapple – although whether it’s likely to be bullet-proof or has a speed advantage over simply running is another matter.

If rolling around in The Baller and swinging between buildings wasn’t enough, it also looks like the base of the new Fortnite vehicle will have a charging pad – that’s thanks to a datamine in the Fortnite games files by lucas7yoshi.

Whatever this "hamster ball" shite is, its only got a "charger" pic.twitter.com/00ocFepOiz

There’s no confirmed date of release for this new rolling piece of thunder, but there’s a new Fortnite update that comes this week so there’s a good chance it’ll appear in that patch. All I know is we’ll soon be having a ball.

Meanwhile on the other side of the fence it looks as though some pretty sassy dataminers have uncovered some potential NPCs coming to rival Battle Royale Apex Legends. Unless you’ve hid under a huge virtual rock you’ll know that Apex is the closest contender to Fortnite right now, smashing in excess of 50 million players since it’s launch in January.