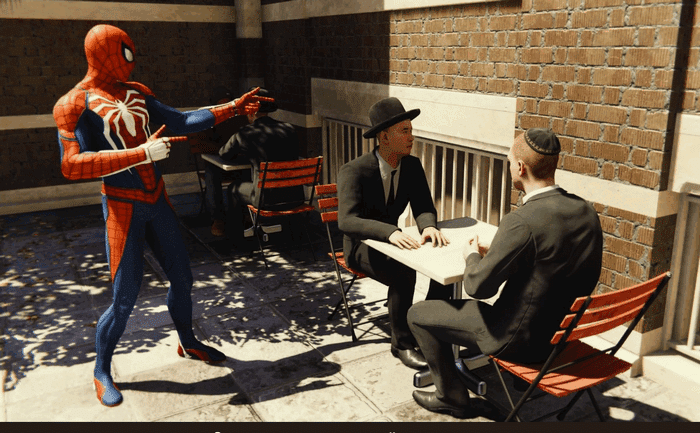 A mere eight months ago Spider-Man dropped onto our PS4 screens with many trying to Platinum all trophies. In addition to smashing through the City That Never Sleeps DLC many of us were on the hunt for the Spider-Man PS4 Easter eggs. Just when we thought we’d uncovered them all, another has emerged that no one even noticed.

Spider-Man PS4 Easter eggs – nobody saw this one

Insomniac Games Senior Programmer Elan Ruskin reckons there’s one of the Spider-Man PS4 Easter eggs that we all turned a blind eye to. While roaming the tops of buildings in New York City this one Easter egg only appeared on a Saturday; where a particular set of people completely disappeared for the entire day.

The Tweet below was posted over the Easter holidays (ironic I know) by Ruskin, who states that a resting day called Shabbat (Sabbath in Judaism) is put aside for the Jewish NPCs in Spider-Man PS4. In real life the Jewish community will use a Saturday as a rest day from work to stay at home – which makes sense as to why they wouldn’t be seen roaming the various areas of New York City. If young Peter wanted to snap a selfie with the Jewish citizens on a Saturday they simply wouldn’t be found.

This feels like the right time to mention an Easter egg that everyone's passed over so far: these guys don't work on Saturdays! pic.twitter.com/kJydFBG4DG

How does it work? In a nutsherll Spider-Man PS4 will check your console system time which communicates to the game that the Jewish Civilians should not appear if the day is on a Saturday.

This clever little attention to detail is one that the majority of people will have missed, but as someone who wants to see all the Spider-Man PS4 Easter eggs you can bet I’ll be testing this out on Saturday! The interesting thing here is that eight months after release this was not public knowledge until now, so it does make one wonder what else could be undiscovered.

This just goes to show how much attention to detail has been put into the game by Insomniac Games.

Yet to play Marvel’s Spider-Man? check out our Spider-Man PS4 review to see what you’re missing!