The remake that teaches us of all we have lost. 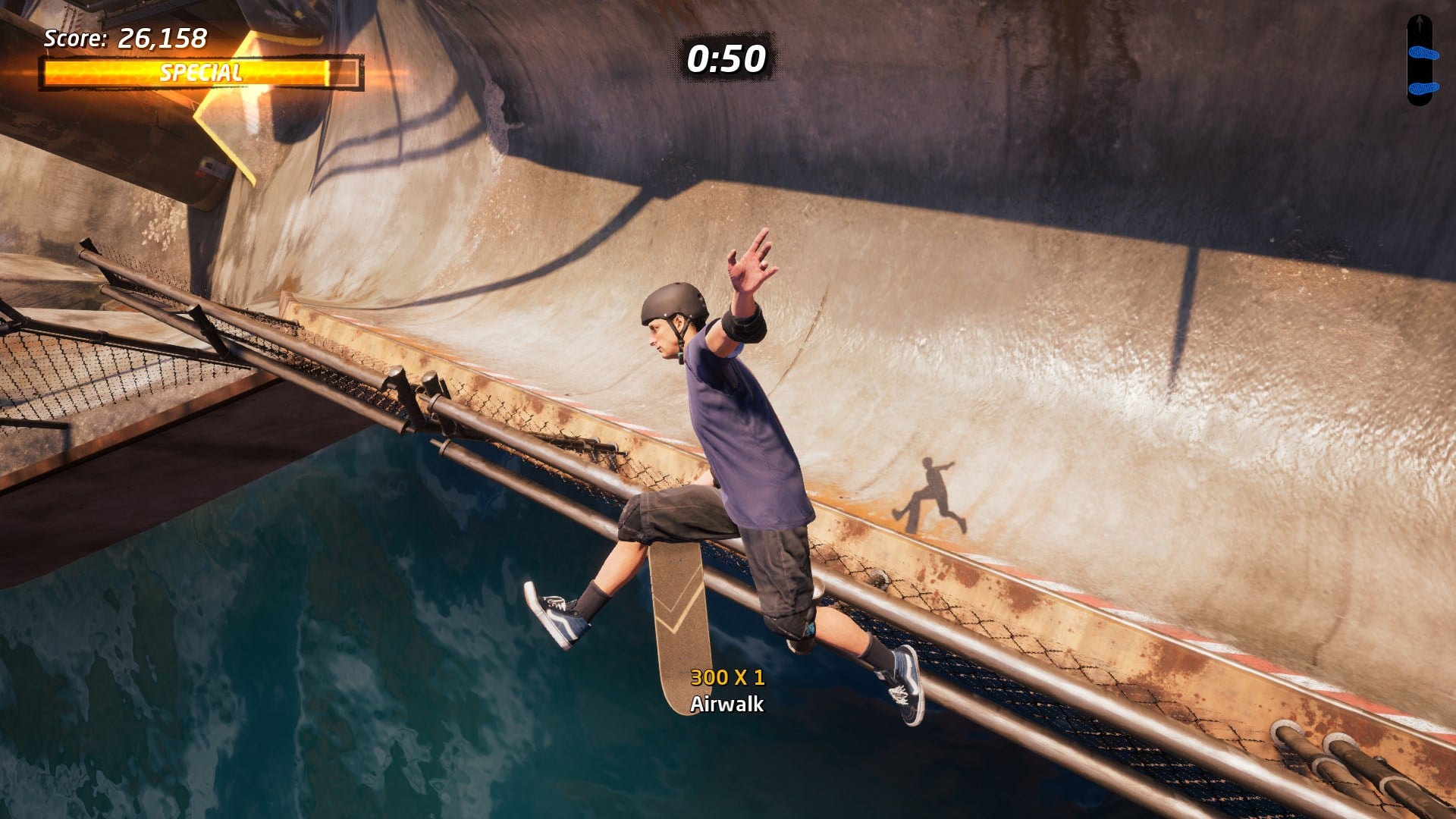 I’ve never been a skater, and these days if I fell I’d do more damage to the concrete than the concrete would do to me, but I’ve always loved the original Tony Hawk games. It’s no secret the series has suffered in recent iterations, and I’ve been there with every new release and ended up just as disappointed as anyone else. This isn’t even the first time the original game has been remade in the hopes of returning the franchise to its former glory.

So when developer Vicarious Visions decided they wanted to be the ones to finally do it right, they referenced the original game’s code. This led to a game that might seem a little weird to watch compared to modern games, but which feels AMAZING to play. 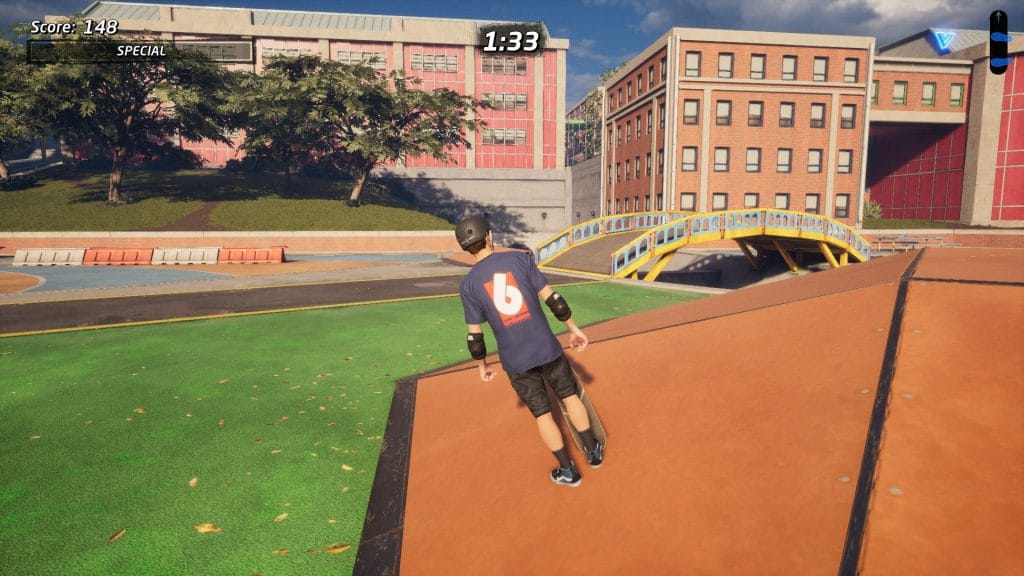 Trust me though, this is a GOOD thing!

What do I mean by that? In our era of ubiquitous game engine options and plug-and-play physics, many developers have learned to rely on what’s easy to make as opposed to what’s best for gameplay. The original Tony Hawk had to run on machines with less power than a Walmart Tracphone, so these options were just a twinkle in the eye of original developer Neversoft back in 1999.

Every movement, every jump and spin had to be hand-crafted by a programmer. Every insane gap between half-pipes had to be creatively placed by a level designer who knew exactly how long the player’s hangtime was at just the right angles. It was never the result of letting a physics simulation determine how fast or how high you could go. It wasn’t even the result of the kind of emerging gameplay you see today when devs throw a bunch of systems together and hope for something fun or funny. The original Tony Hawk games are what happens when you’ve got the right people enthusiastically pulling every ounce of fun out of a small handful of ideas under severe limitations.

This also means when you stop to take it all in, things can look a little funny. Without any regard to gravity, your character can stand at awkward angles on a ramp. You might find yourself jumping off a ledge after you’ve already ridden off of it. Modern gamers might see these things as doing it wrong, but you can be assured it’s all done in the name of letting you have fun. Who cares about standing still when your goal is to be flying at mach speed? Why shouldn’t the game just say “sure, go ahead, we’ll pretend you pressed jump.” 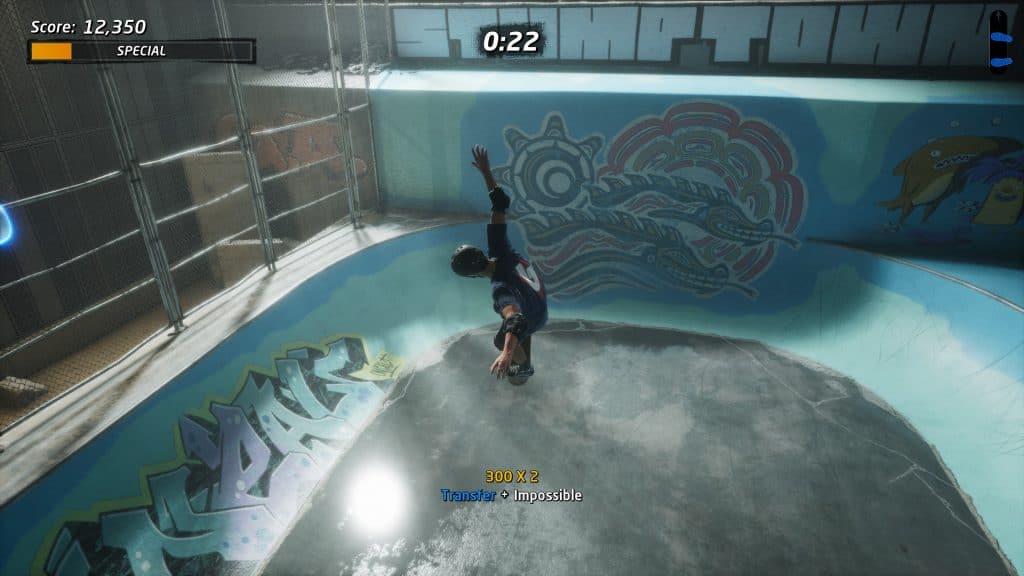 This game is also gorgeous. I could kiss this interior lighting!

By going back to what made the original game fun to play, this Tony Hawk remake starts on a strong note and gives itself room to improve from there. Despite what you may have heard, the previous Hawk sequels did do some good things, and our understanding of game design matured alongside them. Those improvements have been brought forward into this remake.

Of course if you haven’t played a Tony Hawk game before, no worries. They modernized the game where it matters, including a tutorial that’s both robust and actually fun. Within minutes, you’re careening on a skateboard and drawing lines between rails and ramps even while you’re still picking up how the combo system works. 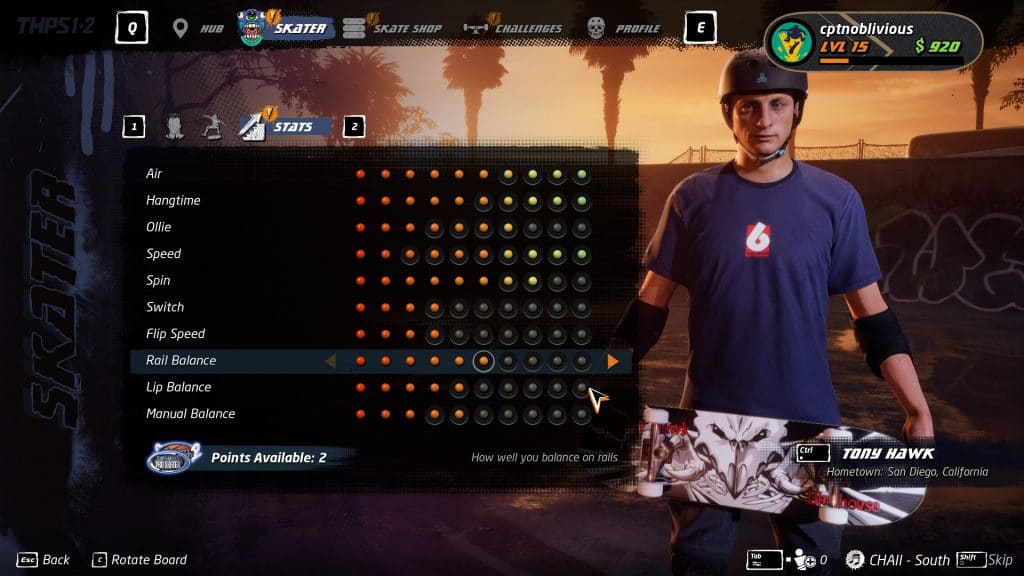 Customizing your style of play lets you make this game feel JUST right!

These upgrades also include a robust character customization feature that allows you to not only change your character’s looks, but also how he or she plays. As you complete campaign levels, you collect stat points you can apply to your skater. In my case, I chose to max out my speed and airtime because I learned I liked performing the halfpipe tricks most.

In this way, the game grows with you as your skills improve. It really is the perfect arcade experience, forged in the fires of turn-of-the-century game design and fortified with all the modern comforts and character progression you could hope for. Each two-minute run is a competition with yourself, and each time you dive in you come out the other side with something new to try. You have to play this game.

Summary
A classic. Always has been.
Good
Bad
5
Highly Recommended

The remake that teaches us of all we have lost. I’ve never been a skater, and these days if I fell I’d do more damage to the concrete than the concrete would do to me, but I’ve always loved the original Tony Hawk games. It’s no secret ...
0
Average User Rating
0 votes
Have Your Say!
Your Rating: 0
Submit
Write A Review
Release Date:September 4th 2020
Developer:Vicarious Visions